Moon has a diameter of 3,475 km (2,000 miles). It is formed about 4.6 billion years ago. It is also known as Luna. The moon is a natural satellite to the Earth, and all it means is that the moon orbits around the Earth naturally. It takes about 27 days to go all the way around the Earth and return to its starting position. The surface of the moon has many things on it such as craters, lava plains, mountains, and valleys. The surface temperature of can range from as hot as 260oF to as cold as -280oF. The Moon is not a light source, it does not make its own light. The moon reflects light from the sun.We can see the Moon because light from the Sun bounces off it back to the Earth. As the Moon orbits around the Earth, the half of the Moon that faces the Sun will be lit up. The different shapes of the lit portion of the Moon that can be seen from Earth are known as phases of the Moon. Each phase repeats itself every 29.5 days.

When the Moon appears to be getting bigger, it’s ‘waxing’ and when it looks like it’s getting smaller, it’s ‘waning’. Once the face of the Moon is fully turned towards the Sun, it’s a Full Moon, and we see it all. But, as the Moon moves around the Earth, the face pointing towards us gradually becomes hidden from the Sun until we can hardly see it at all – this is a New Moon. 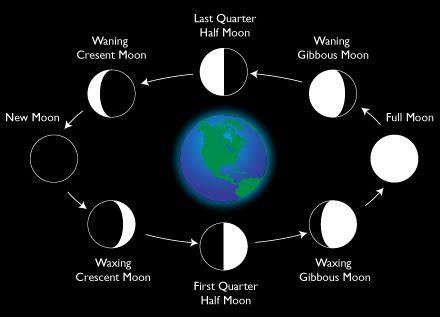 Let colour it with your kids.